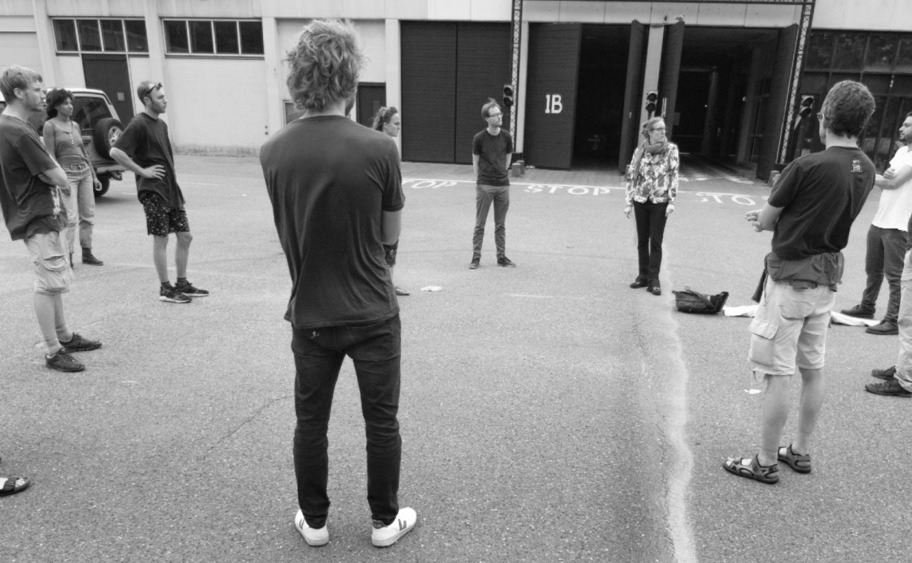 These past couple of months, ‘staying at home’ has become the new normal for many of us. Our own lives and those of others depended on it. For many of us, having a permanent home in a city like Amsterdam, however, has never been normal. Despite the fact that our lives depend on it, also without a pandemic. Ironically, Rutte’s ‘intelligent lockdown’ and the catchy formula blijf thuis brought one of the most politicized issues in Amsterdam back into the lime light: the right to decent housing.

With the prohibition and criminalization of squatting in 2010, a new strategy against gentrification and the commodification of housing has gained grounds in the Netherlands: the VrijCoop strategy. We from Bajesdorp are part of the VrijCoop association, and we build our own housing cooperative based on social principles. We reclaimed part of the sold Bajesdorp land plot back from the Amsterdam real estate market, and we are going to build the first newly constructed, collectively commissioned, and communally owned work- and living-space for artists and activists in Amsterdam. Inspired by the German Mietshäuser Syndikat movement from the 1990’s, the strategy of VrijCoop is based on the idea of commoning. Instead of buying a house as an investment and for personal profit, VrijCoop buys property or land off the market and puts it back into the commons. The bought-up property and ground will now collectively be owned by the association VrijCoop and the members of Bajesdorp. It can never be sold on the free housing market again. In that sense, it is a bit like squatting with other means.

Who are we?
Bajesdorp is now a group of 12 people, rooted in the old Bajesdorp, a community of squatters that started living and working in the abandoned houses of the former Bijlmer prison-guards over 15 years ago. When the governmental plans to demolish the entire Bijlmerbajes complex and to re-develop it into a whole district became reality, a small group of the Bajesdorp squatters attempted to buy their former homes from. That did not work out, as the government wanted to sell the whole area at once. But after two years of relentless lobbying, the squatters managed to make sure that whoever was going to buy the whole land plot, would have to allow the Bajesdorp community to develop a new project as part of the overall plan. As one of the members from back then remembers: “There we were, with our anti-capitalist ideas and ideals sitting at the table with one of the Netherlands’ biggest profit-driven companies. Finding common ground surely wasn’t easy.” This was in September 2018. Since then things have moved quickly. The Bijlmerbajes has been demolished, and so have the former prison guard home of Bajesdorp. The Bajesdorp group changed several times. Some members left, new members joined, left again, and others joined. The city of Amsterdam agreed to buy the ground on which the new building of Bajesdorp will be built and to lease it back to us. An architect was hired. The first building plans are co-designed. Many more group meetings held, lately largely online.

What’s in the future?
It felt a bit funny, to go ahead with the project in these insecure times. Will it be possible to do construction in times of a pandemic? Will our funding go through now that so many people and institutions lost their income? We decided it is now more than ever the time to future-proof the housing market in Amsterdam, to make sure, that with the next blijf thuis, staying at home will be possible and pleasant for much more of us than this is the case now. Bajesdorp, in its new shape, will obviously not solve the problem of the housing market by itself, but we hope to show with this project that there are alternatives out there. We hope to inspire others by example, to start their own social housing cooperative, to build on our experience, expertise, and empathy. This is something we often remind ourselves of in the group. Whenever there is a setback, or when group meetings feel too long and exhausting: we are not building for ourselves only. We are ‘freeing’ property from the speculative housing market for generations to come. We are a pilot project for an alternative housing market in the city of Amsterdam. Hopefully we can be an inspiration for many more communally-run house projects in the near future.

How do we finance the project?
In order to realize our new Bajesdorp building we will apply for a mortgage from a bank. We will also receive some subsidies from the city for building a ‘broedplaats’, and we will put in some money ourselves. But the most important part of the financing has to come from our crowdlending campaign. We chose deliberately for crowdlending and not crowdfunding because we also want our financial structure to adhere to the principle of commoning. If you want to support Bajesdorp you can lend it money. In return you will be given bonds (obligaties) over which we will pay you a small interest. As soon as the building is paid off, we can refund the obligaties through the rent we pay for living in the building. The interest paid over the lending looks as follows: for 5 years (1,5% interest, update: 1.7), 10 years (1,75%, update 2%), 15 years (2%, update 2,25%) and 20 years (2,25%, update 2,5%). With crowdlending we avoid that only large investors lend us money, who greenwash their image. Instead, it allows us to be communally crowdsourced, by you, by other like-minded collectives in the city or abroad, by friends and family members and individuals with smaller pockets who want to support the project.

How you can support the project and make a difference
If you want to make a difference in the Amsterdam housing market you can, for example, do so by supporting one of the VrijCoop housing projects by lending them money. Our crowdlending campaign starts 1st of October (update: the obligations can be bought from December). If you are interested in supporting Bajesdorp contact us via info@bajesdorp.nl